The barrel of my shotgun slightly rose and fell as my pulse and breathing quickened. I hadn’t yet killed three gobbler turkeys in my life and my excitement was palpable as I snugged against a tree in a mix of hollies, oaks and laurel.

I lucked into this motivated gobbler on an early lunch break one spring during my military/civilian career stint at Fort A.P. Hill, a large Army training installation between Richmond and Washington, D.C. An hour isn’t a long time to turkey hunt and I was running and gunning, driving a couple gravel roads not far from my office. I slipped some leafy camo outerwear over my work clothes and carried a box call and a Quaker Boy push-button Easy Yelper. At my second calling spot, I was astounded to hear a nearby gobbler respond. I hurriedly grabbed and loaded my gun, hustling into the woods and quickly finding a place to sit. The bird gobbled again; this time closer.

I raised a knee, rested the gun and picked out openings in the vegetation where I might get a shot. Minutes later, I saw the turkey advancing, popping into half struts a few times while moving and looking for his hen. By the time he moved into the small clearing where I my barrel was pointed, I was almost in a “I forgot how to breathe” mode. I didn’t know enough to cluck or putt, using my mouth to freeze the bird in place, and took a shot while the tom was walking. I missed, shooting below and behind, watching the shot pattern blast leaves on the forest floor while the bird sprinted away.

Like many turkey hunters who began the pursuit as an adjunct to deer hunting or wingshooting, my first experiences chasing longbeards involved the same shotguns I used to fire buckshot or birdshot. That is, they were made for pointing and usually sported a single bead at the end of the barrel.

One favorite was an old Remington 1100. A gunsmith fixed it so I could swap out choke tubes. The full choke, the same I used with buckshot, was best when it came to patterning turkey loads. Turkeys have a knack for approaching in ways that confound and contort you, if you dare move at all. There was no shortage of things I could do wrong in terms of getting that shotgun into proper shooting position and aiming down the rib using the bead – and proper aiming was everything.

Fortunately, I discovered new products, such as TRUGLO fiber optic sights that attach to the rib of your shotgun and let you aim it more like a rifle. I used a Magnum Gobble Dot for years on my Beretta AL391 waterfowl gun. Turkeys started falling more routinely. After the spring season, I removed the sights and used the gun for wingshooting.

The cool thing about a red dot sight is that once that dot is zeroed, it doesn’t matter how poor your shooting position is. If that red dot is nicely placed on that bird’s wattles when you pull the trigger, you’re tagging that turkey. With fiber optics, shooting form still counts since you need perfect sight alignment.

I sometimes still use my vented-rib shotguns for turkeys. Last year, I tested a new Aimpoint Micro S-1 on my Beretta and shot a nice Indiana turkey with it. This small, lightweight sight was designed specifically for use on shotguns, attaching anywhere you’d like on the rib. I have some astigmatism in my dominant eye so placing the optic nearly all the way down the barrel minimized any ghosting or flare I saw with the red dot. That optic is pricey, at about $715. The one I tried was a test loaner.

Another gun I recently tried was Winchester’s new SX4 NWTF Cantilever Turkey gun. This semiauto 12-gauge has a rail if you want to attach an electronic optic or scope, but all I did was flip up the rear field sight that’s positioned just ahead of the rail. You center the fiber optic sight at the end of the barrel on your aiming point. A cool thing about that gun is a portion of the purchase price goes to help the National Wild Turkey Federation with its conservation mission. I took my first two Rio Grande turkeys ever with that gun, down in south Texas as Los Encinos Ranch.

For the last couple years, my main “turkey gun” has been a Mossberg 535 pump-action, 12-gauge shotgun. Mossberg has discontinued that particular line, tweaking things and debuting the new Model 835 Tactical Turkey. It does have a couple additional features, but I did like the 535. It’s lightweight, handles and cycles well. I shot my one and only Osceola turkey with it as well as a few Easterns. Medal of Honor recipient and former Army Staff Sgt. Clinton Romesha used it last year to bag his bird on our Indiana hunt. We doubled. Woo-Hoo!

That gun came with a TRUGLO red dot site, a 30mm tube version that attached via a Weaver mount I placed on the pre-drilled deceiver. That optic worked fine across multiple birds but it was fairly large and you had to elevate your cheek significantly on the stock to clearly see the dot.

This year, I swapped the TRUGLO sight for a new Crimson Trace CTS-1400, a lightweight (2.9 ounces) compact, open reflex sight for rifles and shotguns. Doing so required me to buy a Picatinny-style mount for the gun. The mounted optic still rides a little high and an adjustable-comb stock or add-on riser may be the next modification I make to get optimal cheek position on the stock. Or...the unit's base can be separated

from the components that attach it to the rail. If I wanted to, and had thought to, I could have tried to mount the optic directly atop the receiver to further lower the profile -- I probably should've checked that out before adding the Picatinny mount. The new sight has a 3.25 MOA aiming reticle and a large field of view.

One thing I like about this sight is that it’s smarter than me, remembering to shut itself off when not in use. I’ve burned through a lot of batteries in optics and other devices by forgetting to turn them off. The unit takes a single CR2032 battery that is easily replaced from a side portal, meaning you don't have to mess with the optic's mounting to get the battery in or out. With the auto shutoff feature, it's estimated a single battery has a 20,000-hour lifespan.

It’s also waterproof, shock-resistant, dust-proof and fog-proof and has a form-fitting rubber cover to protect it. Crimson Trace, long known for its laser grips for handguns, now has a couple red dot sights options. Prices begin at $199. The CTS-1400 has an MSRP of $499. Each open red dot sight comes equipped with a cover to protect the sight and keep it clean.

Somewhat amazingly, I was able to get this new sight zeroed at 40 yards after just 4 shots. Well, okay I took seven, but a couple weren’t really needed. Two shots were just to confirm adjustments and accuracy and one was to try a #5 pellet load as well as #6.

Shotshell innovations such as Federal’s Tungsten Super Shot and Winchester’s Long Beard XR are making turkey hunters more lethal at greater distances. Federal’s tungsten loads are simply devastating downrange. The pellets are so dense you can downsize to minuscule #9 shot and still retain kinetic energy. Winchester’s revolutionary idea of adding a frangible resin to its Long Beard XR pellet load dramatically tightened patterns out at 40 yards and beyond. Forty yards was often-cited as the maximum-acceptable distance for shooting at a turkey. Anything beyond was too susceptible to shot patterns falling apart and causing a miss or, worse, a wounding. Today, modern, super-tight choke tubes paired with shotshells like these listed above boost potential. How far is too far is something you figure out by thoroughly patterning your shotgun and understanding the kinetic limits of the shot you’re using. I will admit I have killed turkeys with Long Beard XR out to 50 yards and a little further. 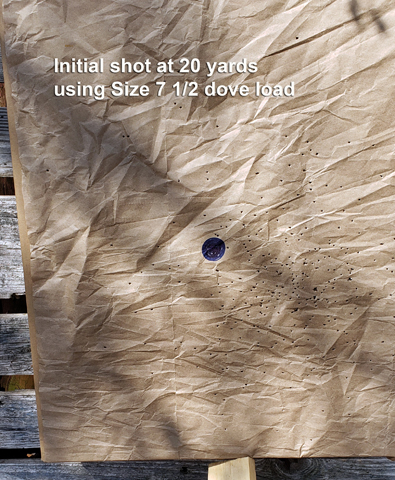 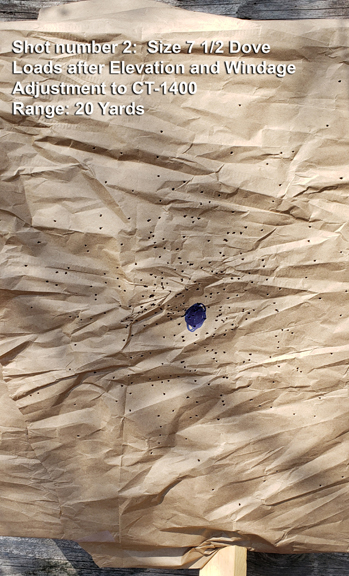 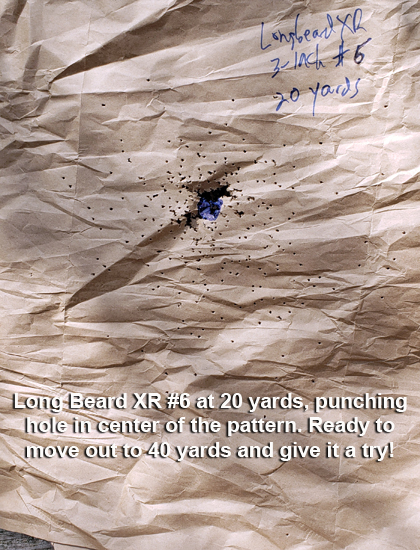 I patterned the Mossberg 535 and CTS-1400 in a traditional manner, using large sheets of paper to reveal where the pattern was centering. This is especially important if the initial pattern is considerably wide or high or low. I simply used a magic marker to make a 1-inch aiming point in the center and let a cheap size 7 ½ dove load rip for the first shot. Happily, it was just a few inches off the mark. The CTS-1400 has easy-to-adjust elevation and windage settings. You use a super-fine Allen tool (provided) to tweak the optic. My initial adjustment had the next load of birdshot right on my center dot. Money! Next, I used some old Winchester HD turkey shot to see if it, too, would hit in the same place as the dove loads. It was close. Another slight tweak and I fired a round of Long Beard XR in 3-inch, #6 shot, the load I may be using on upcoming hunts. True to the nature of that load, it just about punched a clean hole in the dead center of the target while concentrating nearly all pellets in a 10-inch circle.

I backed off to 40 yards and fired another round of #6, this time at a reactive target simulating a turkey’s head and neck. Amazingly, even though my pattern was centered slightly to the right, 200 pellets landed in the 10-inch circle representing the primary kill zone (see photo at top). That’s nearly 50 percent pattern effectiveness given that a 3-inch shell of #6 has about 400 pellets. Just for comparison, I fired a single load of Long Beard XR in 3-inch, #5 size. That round patterned slightly left. The could be operator error or those #5s may just group over there. A couple more test shots will dial that in, should I opt to use #5s. Even with the slight left deviation, 117 pellets were in the 10-inch zone, representing 34 percent pattern effectiveness. Either shot would’ve stone-cold-killed any gobbler.

No matter what gun you’re shooting, the “right” number of pellets inside the 10-inch circle will vary, influenced by shot size, choke constriction and shotshell innovations. The key is knowing how big a turkey ‘s head and neck really is and then making sure your pattern has no gaping holes. This is when you can add some of your fancy, turkey silhouette targets for better graphic assessment. If you really want to figure out the maximum range that you can confidently take a shot, simply repeat the process at 50 yards or longer. Eventually, you’ll see the pattern fall apart. And keep in mind that some pellets can begin losing a lot of velocity past 50 yards.

Keep learning and practicing. Good hunting and be safe out there.

'Blast From the Past' - Old, Souvenir Video Revisits an Epic Morning in an Eastern Shore Duck Blind