Trolling deep water successfully requires technical know-how and the right equipment. It is often the only way to catch fish on some offshore and big water fishing expeditions. My mid-September 2020 journey to northern Michigan provided an opportunity to join Captains Lance Valentine and Dean Cushman, along with Ducks Unlimited’s Chris Sebastian, public affairs coordinator for the Great Lakes/Atlantic Region, on a trip to Lake Michigan’s Grand Traverse Bay. We fished the big bay’s eastern branch, launching the boat from Elk Rapids.Besides being able to final take a road trip during the COVID-crazy year that is 2020, it was also great to see a few friends, fish new water and see new gear.

Many people associate fishing the Great Lakes and similar locales with boats sporting a “Deep V” design. We went out, though, in an Angler Qwest 824 Pro Troll fishing boat. At first look, one might say, “Awe, a pontoon boat,” but as Valentine notes, “It is NOT a pontoon. It’s a hardcore fishing boat built on a pontoon platform. I jokingly refer to it as a ‘reverse mullet’…a party in the front and business in the back!”

The boat is configured as a fishing machine. The fully tricked-out back cockpit is outfitted with tackle storage, a Traxstech track system, including an arch, that allows for quick setup and interchange of rod holders, downriggers, nets, lure keepers and more. The back walls also have storage compartments with access hatches.

Somewhat surprising to me was that neither Valentine nor Cushman had ever fished this particular piece of water. No matter. We employed Valentine’s 8-step approach to catching fish (covered in the video). It involves such things as figuring out the right depth, water temperature, color pattern, trolling speed and more. He skippered the boat and managed the trolling while Cushman handled the rods and deployed lines. Drift bags helped control speed in the ever-shifting winds of the morning. “One thing that upsets good trollers is when people call trolling ‘idiot fishing’ and think it's just driving around with lures out behind the boat,” Valentine said.

“The Suzuki engine with the Troll Mode lets me dial in my speed to whatever the fish want every day. When I add the Lowrance Outboard Pilot AutoPilot, I can set my speed and direction and just concentrate on fishing,” Valentine said.

Valentine cruised the area, marking fish and clouds of bait on his Lowrance HDS Live 12 fishfinder. Finding fish was one thing, figuring out proper trolling speed at fishing depths was another. For this, Valentine used a Fish Hawk X2 unit, deployed from a downrigger. It uses wireless sonar data-transmission to communicate and looks like a little submarine with sensors encased in clear plastic.

“We had to change our GPS speed over-ground, depending on which way we were trolling (with or against the current) to get the productive speed at the lures. This is something most anglers don’t pay enough attention to, even when trolling in smaller inland lakes at shallower depths,” Valentine said. The difference, Valentine explained, is "speed, velocity and "action." Apologies to the more technically savvy anglers in the readership, but many people don't understand that current sometimes may run a little faster at fishing depth than it is on the surface. The Fish Hawk X2 unit helps you figure out how to compensate and achieve the right lure speed and action whether your trolling against or with the current.

“If we don't adjust for the current, we will see some depth changes,” Valentine explained. “Going against the current, the extra water pressure makes weighted lures, sinkers, lead core line, downrigger balls, etc., ride higher in the water column. Conversely, if we turn around and go with the current, lures run deeper.” The Fish Hawk tells him the speed at lure depth or what is called the “down speed." After catching a fish, he notes that speed on the Fish Hawk and tries to keep that productive speed at the lure by adjusting the boat speed.

As I said, it’s technical fishing.

Some of our lines were deployed with Dipsey Divers, a Great lakes favorites for any deepwater species. These are round, adjustable individual planers that carry a lure down and away from the boat.

Eventually, 10 lines were tempting fish with a variety of Warrior spoons and Spin-N-Glo lures by Yakima Bait in multiple colors. Some lines had Mack’s Lure Flash Lite Attractors above the spoons. These are actually brightly colored, counter-rotating blades that reflect light and appear to be flashing, enticing predatory fish.

Cushman gave a rundown of the gear we used on the trip, noting we ran 3 basic setups.

Dean said our best lures that day were Warrior flutter spoons and Little Warrior flutter spoons fish on a clean line or behind a Mack’s Lure Flash Lite.  The Flash Lite adds additional attraction and mimics a school of baitfish. Our most productive color was “Warrior Demon” in the little warrior and “Spoiler”in the standard flutter spoons. Flutter spoons have more of a quick snap to them versus the slow roll of a traditional salmon spoon. The Our other productive presentation was a Wardens Spin and Glow that was fished behind Mack’s Lure Double D Dodger.

I probably would've said something like, "We were loaded for bear," since technical fishing really isn't my game, but I sure admire those who master the tools and techniques and let nimrod spin fisherman and bait dunkers like me catch fish in challenging situations.

Fish On! Fish Off!

Sebastian and I took turns winding in fish. We both know Valentine and Cushman were the ones catching this fish. We got to crank them in and smile for “hero” photos.

Our first fish was a small, barely legal, lake trout. I later brought in another laker, which turned out to be our largest fish of the day. Winding in a nice lake trout isn’t unlike catching a spring rockfish around the Chesapeake, with the occasional feel of the fish shaking its head or trying to change direction. Of course, I also enjoyed the biggest fail by losing an even larger laker at the net. Maybe I didn’t have the rod tip high enough -- maybe the net hit the line or the lure. Fortunately, we can review gameday film like NFL coaches. It’s all on video courtesy of a drone Sebastian was then flying around the boat.

Lake trout weren’t the only fish we caught. Ciscoes, alternatively known as lake herring, chub or tullibee, also fancied our Little Warrior and Flutter Spoons. They proved to be the mainstay fish of the day. We landed several and lost a couple. These fish are interesting specimens, with silver sides sporting large scales and a topside that’s a beautiful greenish-blue. Many consider them a baitfish since they are favored prey of walleyes and northern pike.

Overall, it was a superb day on a beautiful lake. Returning to the marina, I was surprised how well this boat popped up on plane and cut across the top of the waves. Valentine said the boat and motor are paired such that the boat rides on top of the waves and not through them. “Plus,” he noted, “the wide footprint created by the three keels means very little ‘rocking’ in rougher water, so sea sickness is almost eliminated.”

Just about every one of my outdoor adventures requires somehow cooking the reward at the end of the journey. Trophy quality truly does reside on the plate. My fish, including salmon from a northern Michigan Carp River fly-fishing adventure, went into the Camp Chef Woodwind Pellet Grill and Smoker. My taste-test verdict: thumbs up on the salmon and lake trout; pass on the ciscoes – never have been fond of herring. But that’s just me…good fishing! 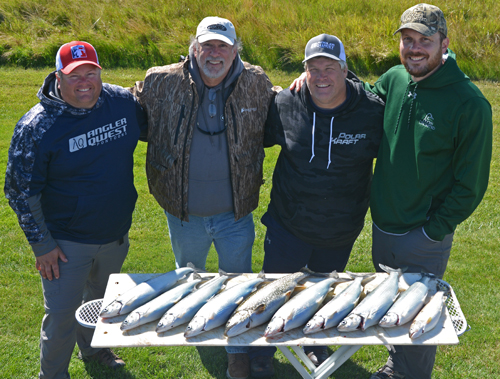 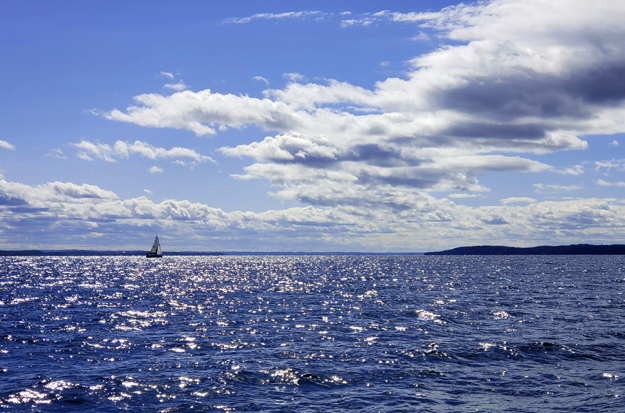 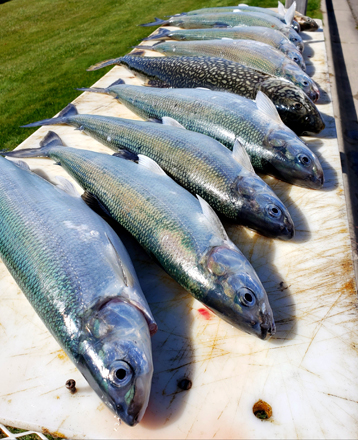 Northern Michigan a Fishing, Hunting Wonderland - Did Someone Say 'Salmon on the Fly'?