Northern Michigan a Fishing, Hunting Wonderland - Did Someone Say 'Salmon on the Fly'?

Note: A shorter version of the article also ran in the Oct. 1, 2020 edition of the Fredericksburg Free Lance-Star.

You know, maybe there is something to this fly-fishing stuff. For certain, every time I see a fish take a fly, I’m hooked. Unfortunately, this only happens every couple years or so. I suppose if I lived a little closer to some superb fly fishing, I'd do more of it. I fly fished a lot during my military years in Colorado, often for cool water cutthroats, rainbows and brook trout in high mountain lakes and streams. Of course, I was cheating -- a little. I used an old Daiwa ultralight spinning rod and reel - they called it the "minicast" back then. I used 4-pound monofilament line and attached a clear bobber about 5 feet above where I tied the dry flies. I caught fish using a fly so I felt like I was a fly fisherman. Until I got to hang out with dedicated fly anglers...

A mid-September trip to Gaylord, Michigan offered several outdoor opportunities. The first was bona fide fly fishing on the Carp River. When Jordan Kettlewell, the accomplished fly angler who was going to take me fishing met me to head to the river, I asked about spinning gear.

He let me borrow some waders and felt-lined fishing boots. The river rocks in the Upper Peninsula where we were heading could be slick with underwater vegetation. The boots would help keep the proper part of me above the water.

One vehicle was already at the small, secluded parking spot where we would access the river. A man and a woman headed in just ahead of us. They were carrying spinning gear and I swear I heard the woman say something about, "Where are the worms?," something you'd never hear from us fly fishermen.

We walked down a narrow, overgrown trail, occasionally peaking at the river. It was sometimes possible to spot salmon in the water and develop a plan of attack. "There are a few pinks," Kettlewell said. "Do you want to go after them?" Who am I to pass up an opportunity to cast a fly to any salmon, but I told my guide that I was interested in seeing if any king salmon might first be found. We walked on and, sure enough, Kettlewell spotted the tail movement of a king in about two feet of water. We negotiated our way down the bank and into the river. With a minute of quick coaching on how to cast to that fish, I was soon in business.

"Hmmpf, and they call the musky the fish of a 1,000 casts,” I muttered as I drifted the wooly bugger fly once again past the salmon's nose. The water in this Lake Huron tributary of Michigan’s Upper Peninsula was stained a deep tea color, and higher than usual for this time of year. The current constantly pushed against my waders. Yet, with polarized sunglasses, the big fish clearly stood out about 10 yards from me.

After about a million bad casts and a few thousand so-so casts, I handed the 9-weight rod to Jordan Kettlewell. “Are you sure?” he said. “Yup. I need a break. I don’t know what I’m doing wrong,” I said, again reminding him that fly fishing wasn’t one of my regular gigs.

Kettlewell, a sheriff’s deputy by profession and a host of a television show called “Michigan Gone Wild,” took the rod and immediately began executing quick over-the-top presentations. By his fourth or fifth cast, the line tightened and things got nuts fast.

“This fish is going to take me down the river,” he yelled as ran through the water as line sped off his reel.

I climbed up the riverbank along with our other fishing partner, Mark Copeland of Jay’s Sporting Goods in Gaylord, Michigan, silently giving thanks it wasn’t me on the other end of that fish. I’m not as agile as I used to be and I’m sure the hookup would’ve resulted in a major league slip and dunk and, probably, a busted expensive fly rod. We wanted to watch the action. The only way was to get on the bank and run to a point ahead of Kettlewell and the salmon.

“I’m into the backing,” we heard him shout from the water below. Not good – almost out of line. That fish needed to play out soon. Mark and I finally reached the point where Kettlewell had stopped the fish. We looked on as he regained line and worked his way to the tired chinook. The verdict upon reaching the fish was unfortunate. “Foul-hooked in the lower back fin,” Kettlewell announced. Only fish caught in the mouth are legal to keep.

Kettlewell carefully unhooked the salmon, lifted it for a cross-river photo and then quickly returned to knee-deep water where he held it by the tail and moved it back and forth to circulate water over its gills. After about 20 seconds, the fish regained strength and swam off to resume its important mission, namely, spawning a next generation of salmon.

Feeling in the Pink

Pink salmon, much smaller than their king cousins, were also making a spawning run to the river. The males grow a pronounced hump on their back during spawning season, giving them their other nickname – “humpies.” We spotted multiple groups of pinks, usually a “hen” or female staged over a spawning bed with two or three males nearby jockeying for position and mating duties, such as they are for fish.

These smaller salmon might be more my speed, fly-fishing novice that I am. I accepted the rod and with Kettlewell acting as my “net man” and coach, stalked into position. It was a matter of figuring out the speed and angle of the drift. Cast too far and hang ups on the rocky bottom were likely. Cast too short and the fly is past the fish almost as soon as it hits the water.

The largest male finally had enough. It was exciting to watch him break right a few inches and try to slurp in the fly. He missed or I missed, but somehow it worked out. I simply stopped the drift, gave the line a tug and, “boom,” he nailed the fly. Now, these salmon are only about 18 inches long, but my adrenaline rush soared 18 miles high. I played the feisty fish for a minute while Kettlewell jockeyed for position with the net. Soon, I was gratefully holding my first salmon on the fly.

The pinks are said to be excellent smoked or grilled, so this one went into the creel. Over the next couple hours, the scene repeated itself. Copeland and I landed pink salmon and, with Kettlewell, we shared the beauty and tranquility that comes with this type of fishing on a mostly uncrowded river.

There is something about feeling and hearing the river, coupled with the wind in the trees, that is good for our human essence and soul. It was mid-September and I could only imagine how much more beautiful the scene would be in a couple weeks once fall foliage began peaking.

The salmon gods generously gave me a final crack at a king. As Kettlewell and I slowly hunted the river looking for fish, we heard a slight splash behind us. We turned in time to quickly glimpse the king. It materialized on the other side of the river, giving me a couple long-cast attempts before disappearing. Oh well. The good thing is Kettlewell and I already talked about a longer trip next September. 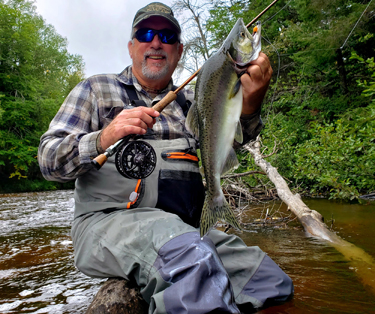 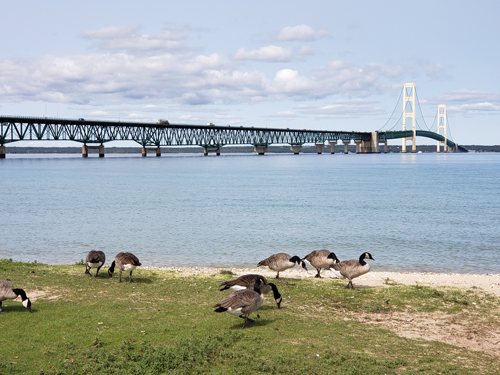 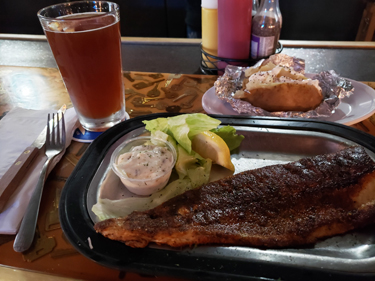