(With a video) Jim Crumley, the innovator of modern camouflage when he created the Trebark brand, may be an avid bowhunter for white-tailed deer, but he grew up hunting squirrels and other small game as a boy in Bristol, Virginia. His wife Sherry, an avid hunter herself and current board member of the National Wild Turkey Federation and past board member of the Virginia Department of Game and Inland Fisheries, told me that Jim had a way of preparing squirrels everyone would love.

Note: A version of this article appeared in the Fredericksburg Free Lance-Star.

To those listening nearby, it may have sounded remarkably akin to a Sergio Leone “spaghetti western.” You know -- the ones with Clint Eastwood, like the “Good, the Bad and the Ugly.” Those movies often had scenes with the camera in extreme closeup mode while grimy actors lustily chomped into plates or bowls of the daily special at some austere cantina.

Our blue-plate special was gray squirrel, along with a couple pieces of cottontail rabbit. We attacked the leg sections, which were fried to a golden brown after first being tenderized in a pressure cooker. It’s hard to believe a 13-year-old boy and an old man can make so much noise sinking their teeth into sections of a one-pound rodent, but that’s how my neighbor Colton Josselyn and I roll. Jim Crumley’s prized squirrel preparation technique delivered the goods just as advertised: delicious.

Crumley, who lives in Botetourt County, Va., with his wife Sherry, is the originator, the visionary, the not-so-

mad scientist who looked at hunter camouflage options in the late 1970s and figured we could do better than the typical military battle dress uniform patterns most people were wearing.

Crumley grew up in Bristol, Va., and became a teacher in Alexandria after graduating from Virginia Tech. He was, and remains, an avid bowhunter. In a 2016 interview with bowhunting.net, Crumley explained he began tinkering with clothing in an effort to make himself less detectable in the woods. He bought gray Dickies shirts and pants and tie-dyed them in brown dye. Figuring that most hunters sat next to a tree trunk, whether on the ground or in a stand, Crumley created a pattern on the clothing that resembled tree bark. The Trebark® pattern and company were born. By 1980, he was exhibiting at outdoor shows and eventually got his product listed in the Cabela’s catalog. He quit his teaching job in 1981.

Like Crumley, Colton started squirrel hunting when he was 8 years old. Now, as a young teenager, he’s a dedicated hunter of not only squirrels, but deer, dove and more. His preferred squirrel tools are a .22 rifle or a high-velocity pellet gun that’s easily capable of cleanly taking the small target out to 30 yards or more. He uses a shotgun for deer. The kid hates to waste any meat so he worked on his skills to ensure every squirrel drops quickly with a clean head shot.

Squirrel hunting has been a family tradition on his mother’s side for generations and family lore tells of the elders eating not only the meat, but the brains and cheeks. His mother Jennifer said her grandfather and buddies used to pot whatever small game they could manage cooking everything together in one dish they called "whippoorwill stew." I’m not sure if eating squirrel brains is advisable today. I’ve heard it can cause a person to dart in and out of streets, often toward incoming traffic.

Colton has been a budding wild game chef for a number of years, often getting free rein in the kitchen and exhibiting a willingness to experiment with various spices. He regularly prepares his own version of a squirrel recipe my wife Maria and I developed for Virginia Wildlife magazine a decade ago. We called it “Baby Back Squirrels,” mainly because the meat becomes very mild and tender and easily falls off the bone. That dish is linked here. He has also made venison wellington. Colton, though, always has a few squirrels in the freezer and was looking for something new to try, expand his squirrel culinary repertoire, as it were.

During some email exchanges I had with Sherry Crumley about how they age venison that has already been skinned and quartered, she noted that Jim had a most delectable squirrel recipe and promised to share it. Jim emailed the details soon after. In some respects, it isn’t so much a recipe as it is a preparation technique. The steps are simple and you use whatever seasonings suit your fancy. You do need a pressure cooker and a rack that sits an inch or two off the bottom.

Colton eagerly accepted the mission and when I arrived to participate and shoot video, he already had something like a hundred squirrels thawed out -- just, kidding, there couldn't have been more than a dozen. We picked the best three to cook for the camera. We also had a cottontail rabbit, dressed and quartered. That, too, was added to the mix, just so we could compare the meats and see if the technique worked well for rabbits, too.

Here's good photo, step-by-step tutorial on how to easily and cleanly skin a squirrel. 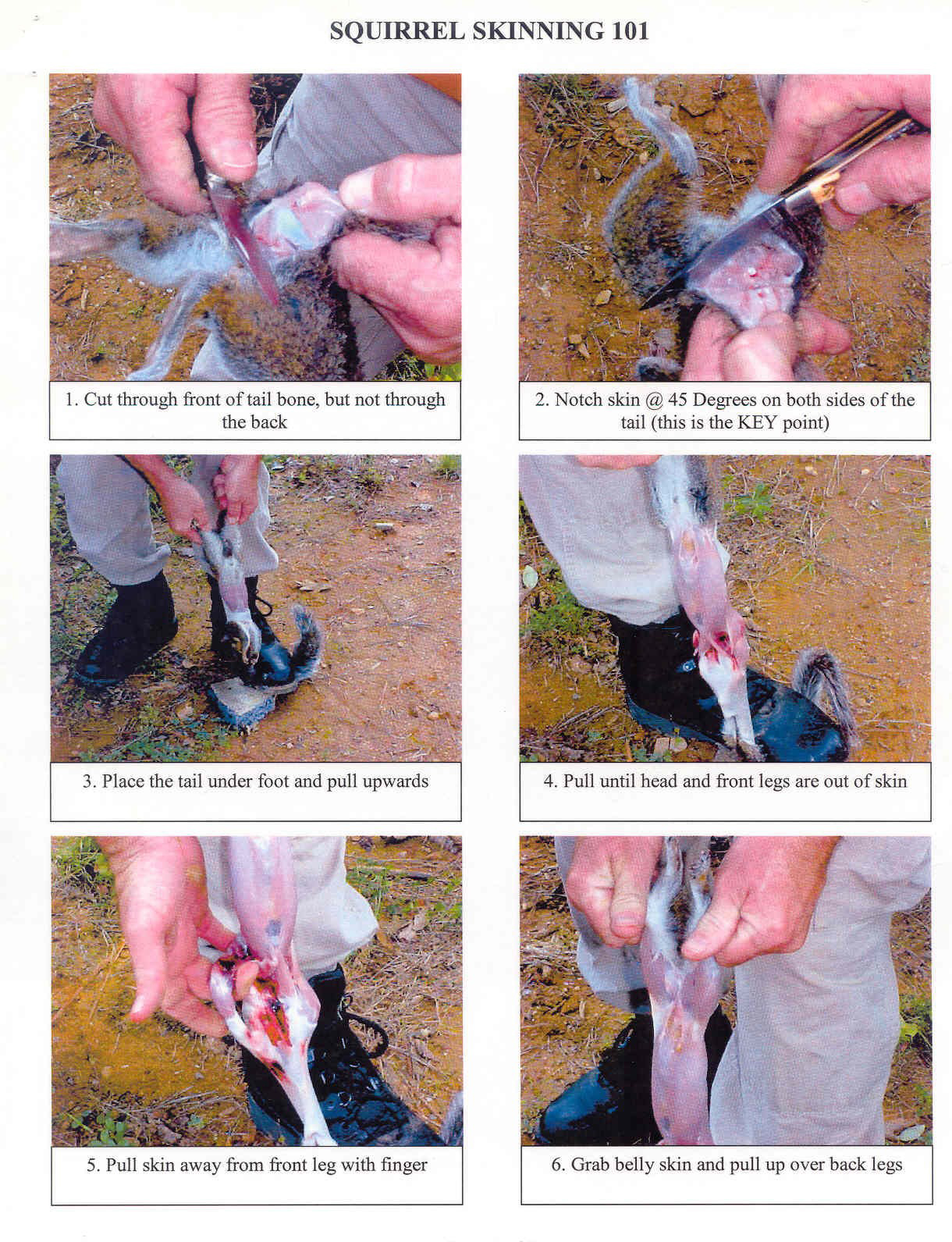 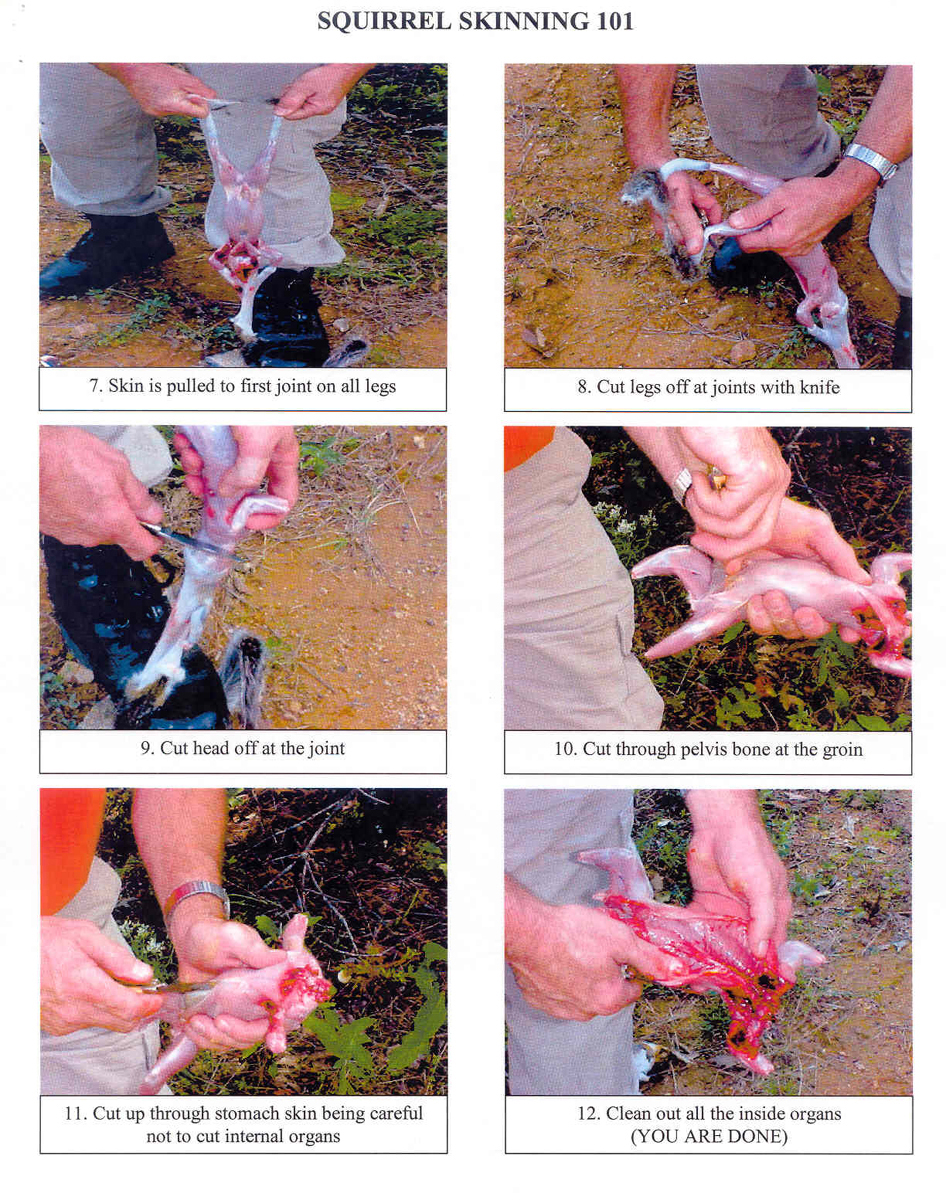 1. First, "joint" the squirrels, removing the legs. Crumley likes to just cook the back legs, saving the rest for other recipes, such squirrel gravy. We, however, added a couple back sections to our cook pot.

2. Next, you fill the pressure cooker with chicken broth, just to the base of the rack. You can use store-bought broth, homemade broth, or a broth like we used, made with "Better Than Bouillon," rich base that you blend with water.

3. Add the squirrel (and/or rabbit) pieces to the cooker and set the timer for 8 minutes. Crumley says he uses the "low" setting. Make sure the lid is securely closed and start cooking.

4. While the pressure cooker is working, prepare your assembly line. Get a couple eggs and a splash of chicken broth and whisk together to make an egg wash.

5. Add a cup or two of flour (depending on how many pieces you're cooking) to a plate and then mix in your favorite seasoning. Crumley said they like to use Big Springs Mill seasoned flour, but sometimes mix their own. Colton and I tried two seasoning variations. One had a Hi Mountain Seasonings Salmon Rub added to basic white flour, while the other had a little salt, pepper and a Maryland concoction called “Todd’s Dirt” -- the original recipe. It appears to have a lot of the same stuff as some Italian or Herbs de Provence seasonings. Both mixtures tasted fine. I'd also suggest trying it with a little Creole or Cajun seasoning. My friend Scott Leysath, The Sporting Chef, shared with me a few years ago that Hi Mountain's salmon rub is excellent on just about everything -- he was correct.

6. Next, pour some panko onto another plate. Panko is a light, flaky breadcrumb breading that easily crisps when cooking.

7. Your meat should be just about finished cooking by the time you set up. Remove the meat from the

pressure cooker and let it cool for a couple minutes. 8. Then, dip each piece in the egg wash, dredge in flour, then re-dip in the wash and dredge in panko, shaking off any excess each time you dredge.

9. Get a large skillet and add about 1/2-inch of oil. Heat it until it's almost ready to start smoking and then add the breaded meat. Have tongs handy and keep an eye on it because it only takes a couple minutes to cook to a golden brown. The meat is already cooked. All you're doing here is adding a little extra flavor and texture.

10. Once it is golden brown, remove it to some paper towels to drain and then serve and enjoy.

It’s wonderful to see youngsters dedicated to hunting and developing outdoors skills. It is doubly rewarding to see them take an interest in following through to create “trophy-quality-on-the-plate” outcomes. So,take youngsters and novices hunting. Teach them safety, conservation ethics, and an appreciation for wild game cooking. It's a gift they'll retain their entire lives. 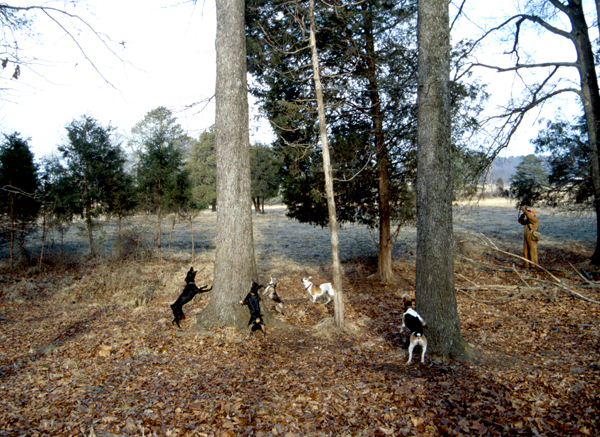 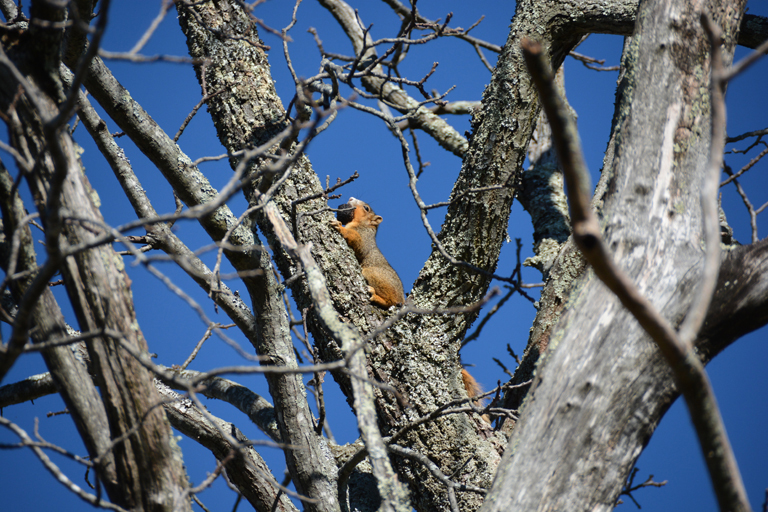